Know the survival::coxph() function that calculates the estimates of the Cox Proportional Hazards model? It uses the gradient descent order II method (known also as Newton-Raphson method) to optimize the partial log-likelihood function of the Cox PH model.

The coxphSGD::coxphSGD() is an equivalent that uses the stochastic gradient descent order I method in the optimization process, which can be beneficial in situations like

The stochastic gradient descent order I method can be used with already calculated estimates to generate updated ones in the situation in which new data appear and one can't recalculate the whole model with all historical data.

The Cox Proportional Hazards model assumes (mainly) that the explanatory variables are constant over time and that the hazard (one of the survival measures) estimates between considered groups are proportional over the time.

This model calculates the estimates that can be interpreted as proportion of the hazard change while moving from one level of the considered explanatory variable to another (while all other variables are fixed) - explained with details in the Mathematical formulas section.

Let's simulate artificial/fake data that follows the Cox Proportional Hazards model assumptions. Such data can be simulated from the Weibull distribution of the survival times (times during which the patient/item is under observation till the event or censoring) with some exponentially distributed conditions on the occurance of the censoring.

One can fit the model with the coxphSGD() function. Below is the explanation of parameters:

Track estimates during each iteration on the contour lines plot

One can extract the estimaes of the Cox PH model for each of the iteration with the following code.

Then having the estimates in each iteration of the optimization process, one can create a plot of the contour lines of the partial log-likelihood calculated on the full data to compare the paths of optimization process with the usage of stochastic gradient descent order I method to get the final Cox PH model estimates.

Here with a black triangle the original beta.zero (set to iteration 0) are marked and with a red square the point that was estimated by SGD I algorithm and with blue crossed dot the estimates calculated by the GD II (Newton-Raphson algorithm).

The code to reproduce the graph can be found in this gist.

The Cancer Genome Atlas and RTCGA

The Cancer Genome Atlas (TCGA) is a comprehensive and coordinated effort to accelerate our understanding of the molecular basis of cancer through the application of genome analysis technologies, including large-scale genome sequencing - http://cancergenome.nih.gov/. 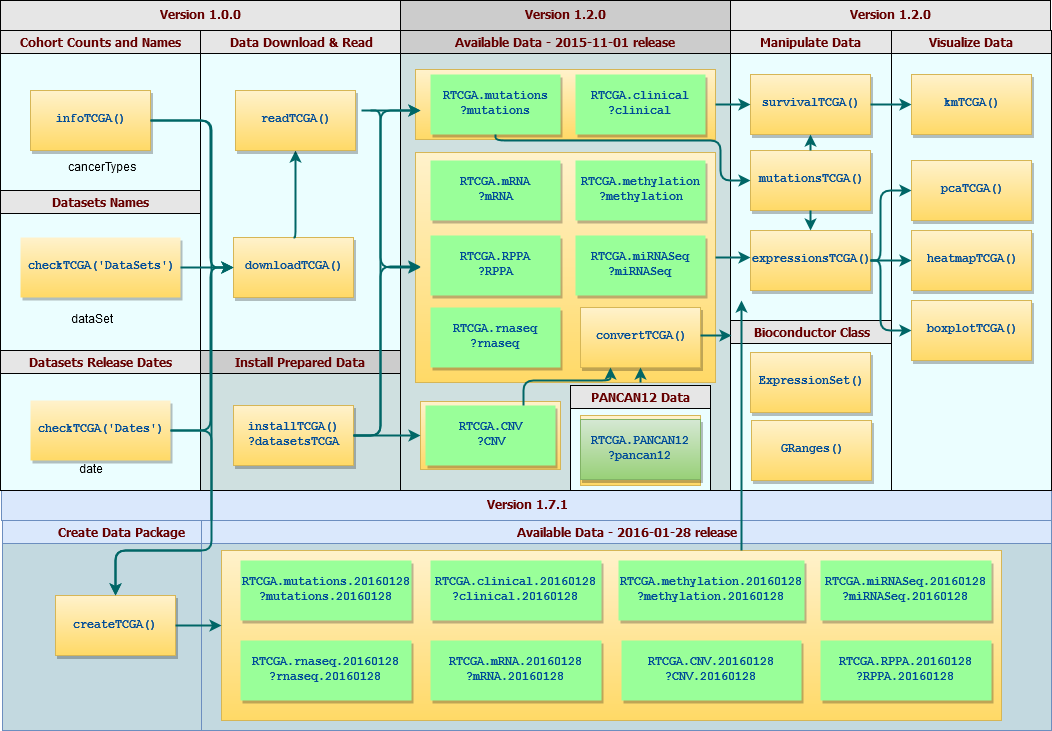 I have converted selected datasets from this study into a few separate packages that are hosted on Bioconductor. These R packages make selected datasets easier to access and manage. Datasets in RTCGA data packages are large and cover complex relations between clinical outcomes and genetic background.

In the real life genetic problems for the algorithm application we will use the clinical outcomes (times and death status) for patients suffering from Breast Cancer and the information about genes that were mutated in the cancer tissue collected from the patient.

Please find the top 20 absolute values of the coefficients from the model with the names of genes mutations they correspond to.

One could see, from the previous table that the BRAF gene if mutated has the negative impact on the hazard ratio (hazard is decreased 0.385 times), which means that people with that mutation will live longer. In the same time the EGFR gene mutation has a positive impact on the hazard ratio (hazard is increased 2.657 times) so that people with that gene mutation has a high death rate and short survival times.

Let's see how the results of the Cox Proportional Hazards model where coefficients where estimated with the Stochastic Gradient Descent order I method corresponds to the trends in data. One visual way of testing the output is creating Kaplan-Meier estimates of survival curves for groups that corresponds to those genes mutations.

Cox model assumes that the hazard function is of the form (for ith obserwation / Xi) λi(t)=λ0(t)eXi(t)′β , where λ0 is not specified nonnegative base hazard function and β is a vector of coefficients.

The Newton-Raphson method of optimization

The Stochastic Gradient Descent (order I) method of optimization

where the step αk is given by a user.

Remarks for the analysis

MarcinKosinski/coxphSGD documentation built on May 7, 2019, 2:48 p.m.
What can we improve?