ICPI/ICPIutilities
Utility functions for working with or creating ICPI products

README.md
In ICPI/ICPIutilities: Utility functions for working with or creating ICPI products 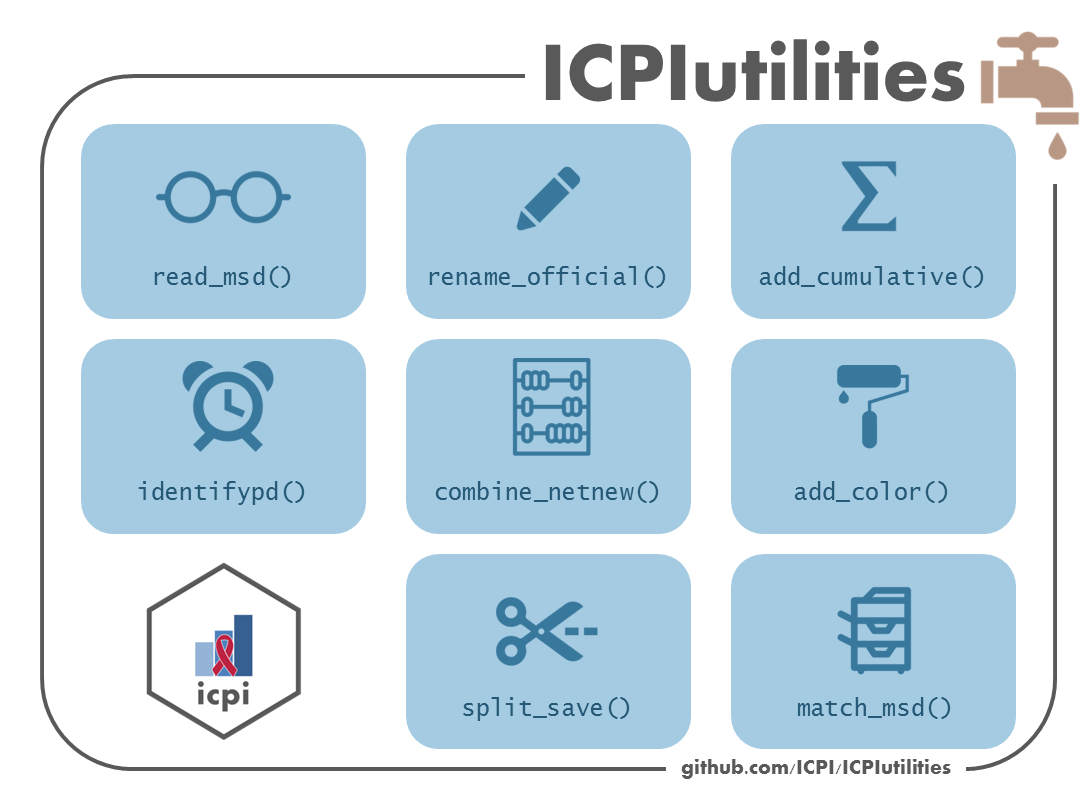 This package contains a number of useful functions for creating and/or working with ICPI datasets and products.

While many packages you use daily are on CRAN, additional packages can also be hosted on and installed from GitHub. You'll need to have a package called devtools which will then allow you to install the ICPI package.

How to install package?

All package updates (starting with v1.0.21) can be found on the NEWS.md page.

To ensure you have the latest version, you can always rerun devtools::install_github("ICPI/ICPIutilities")

The ICPIutilities package has a few functions that analysts may find useful for their work.

The ICPI MER Structured Datasets are posted to PEPFAR Sharepoint as tab-delimited, text files (the extension is .txt). R has no problem reading in delimited files, but can run into issues due to the fact that that R guesses what columns are based on the first 1,000 rows. Since the MSDs are large, the first 1,000 rows of a column may be blank and R would interepret the column as string. Additional quirks arise from the fact that mechanism ids are read as numbers when they really should be string and the coarseDisaggregate variable is read in as a logical variable rather than string. The read_msd() function helps by importing all the columns as string, FY to an integer, and then converting the value columns to numeric (doubles).

An additional feature is the read_msd() function allows the user to save the .txt file as a .rds file. This formatting compresses the file, allowing the MSD to take up one-tenth of the space as the normal .txt file. To reopen an .rds, you can use the base R function readRDS().

Some mechanisms and partners are recorded in FACTSInfo with multiple names as they have changed over different time periods. This function replaces all partner and mechanism names the most recent name for each mechanism ID, so that a mechanism id doesn't have multiple partner or mechanism names. This process of standardization helps with looking at the same mechanism over time in a pivot table in Excel or aggregation in a stats package. The source of the official list comes originally from FACTSInfo, but it pulls from a publicly available DATIM SQL View that maintains this list. This function has been updated to work both with lower and camel casing now.

With the release of FY19Q2, the MSD structure changed to be in a semi-wide/semi-long format, where the fiscal year is its own column and cumulative, each quarter, and target are their own columns. Working with this structure is not as useful in R; instead it's more useful to reshape the data so it is fully long or wide. To reshape the dataset, use the reshape_msd() function, specifying the direction. The default is to reshape it wide to resemble the former MSD structure.

The MER Structured Datasets contain end of year totals for previous fiscal years, but do not include cumulative/snapshot values prior to Q4. This function identifies the current fiscal year using identifypd() and then works to create either a cumulative or snapshot value for each indicator (snapshot indicators include OVC_SERV, TB_PREV,TX_CURR, and TX_TB). The add_cumulative() function now takes an argument of prior_pd allowing a user to add in an cumulative/APR value for a prior year (eg DATIM genie output is missing APR values). By specifying the period, an APR value will be created.

The identifypd() function is used within the add_cumulative() but can be used outside of it as well. It identifies the current period by pulling the last period. It has a few options to allow you to pull the FY or quarter only, or full variable name. You need to specify the pd_type to be returned. Updated to now identify the prior period as well as the current/prior target.

This function calculates TX_NET_NEW as it is not included in the MER Structured datasets. TX_NET_NEW is calculated by subtracting the current period's TX_CURR from the last period and for targets, it's created off the gap between the target for the current FY and the APR value for the prior year. Note that the current MSD starts in FY17; TX_NET_NEW for Q1 and APR for FY17 will be incorrect/incomplete due to the fact that the function does not have FY16 data to base this off. To solve this issue, you will need to download the FY15-16 Archived MSD file and then specify its location as an argument in the combine_netnew() function. UPDATE: As of the FY18Q3c_v2_2 release (2018-10-08), TX_NET_NEW is now included in the MSD and it is not necessary to create it in R via this process.

Most of the analysis at ICPI relies on use of the MER Structured Dataset which is a frozen instance of the PEFPAR dataset produced twice a quarter. Sometimes it's important to work with inprocess data prior to the release of the MSD, which means accessing the data through the PEPFAR Data Genie on DATIM. The output of the Genie is very similar, but not exactly the same. To make working with the dataset easier, the match_msd() function. The function removes columns not present in the MSD (dataElementUID, categoryOptionComboUID, ApprovalLevel, and ApprovalLevelDescription) and adds in an APR column for prior fiscal year (eg FY2017APR). The function extracts the zipped file and outputs an RDS file. UPDATE: The APR column has been included in the Genie files (as of Oct 24, 2018), so this feature is no longer necessary.

The default output is to change the columns to lower case, similar to read_msd(), but this can be turned off.

It's often useful to export a dataset into smaller pieces, particularly when you need the data to populate tools. The split_save() function allows you to define how to break up your dataset and then it exports each grouped dataframe as a csv. You can choose how to group your output (eg by operatingunit, fundingagency, etc.). You will need to specify the filenaming convention (eg "FY18Q3_CascadeInds") and the folder you want to save these in (eg "~/Data/FY18Q3"). Lastly, you can also include todays date at the end of the filename by specifying include_date = TRUE

ICPI/DIV has crafted four color schemes for use in ICPI products. To import a color palette into R, you can use the add_color() function. This function will create a list of hex colors to use when using a graphing package in R, like ggplot(). There are five colors to choose from (an additional color scheme for Panorama "stoplight" colors). Use the function input column to identify which color scheme to pull

Disclaimer: The findings, interpretation, and conclusions expressed herein are those of the authors and do not necessarily reflect the views of United States Agency for International Development, Centers for Disease Control and Prevention, Department of State, Department of Defense, Peace Corps, or the United States Government. All errors remain our own.