SPONGE is the first method to solve the computationally demanding task of reporting significant ceRNA interactions efficiently on a genome-wide scale. Beyond ceRNAs, this method is well suited to infer other types of regulatory interactions such as transcription factor regulation.

However, we identified three key limitations of existing approaches that prevent the construction of an accurate genome-wide ceRNA interaction network: (i) none of the existing methods considers the combinatorial effect of several miRNAs; (ii) due to the computational demand, the inference of a ceRNA interaction for all putative gene-miRNA-gene interactions in the human genome is prohibitive; (iii) an efficient strategy for determining the significance of inferred ceRNA interactions is missing, and thus important parameters of the system are neglected.

To overcome these challenges, we developed a novel method called Sparse partial correlation on gene expression (SPONGE). We reduce the computational complexity of constructing a genome-wide ceRNA interaction network in several steps. First, we consider only miRNA-gene interactions that are either predicted or experimentally validated. Second, we retain only miRNA-gene interactions that have a negative coefficient in a regularized regression model. Third, instead of each gene-miRNA-gene triplet, we compute a single sensitivity correlation (correlation - partial correlation) for each gene-gene pair given all shared miRNAs that pass the above filter as putative regulators. Finally, we derived the first mathematical formulation to simulate the null distribution of the process for different parameters of the system: number of miRNAs, correlation between genes and sample number. Our formulation enables the computation of empirical p-values for the statistic in a very efficient manner, an order of magnitude faster than previous methods. Analyses revealed that previous studies have underestimated the effect of these parameters in their network inference. Network centrality measures can be applied to SPONGE inferred ceRNA networks to reveal known and novel sponges, many of which are potential biomarkers.

Further details demonstrating how SPONGE improves over the state of the art and how SPONGE inferred ceRNA networks can be used for biomarker discovery will be available in our paper (manuscript submitted, link will be included here at a later point). 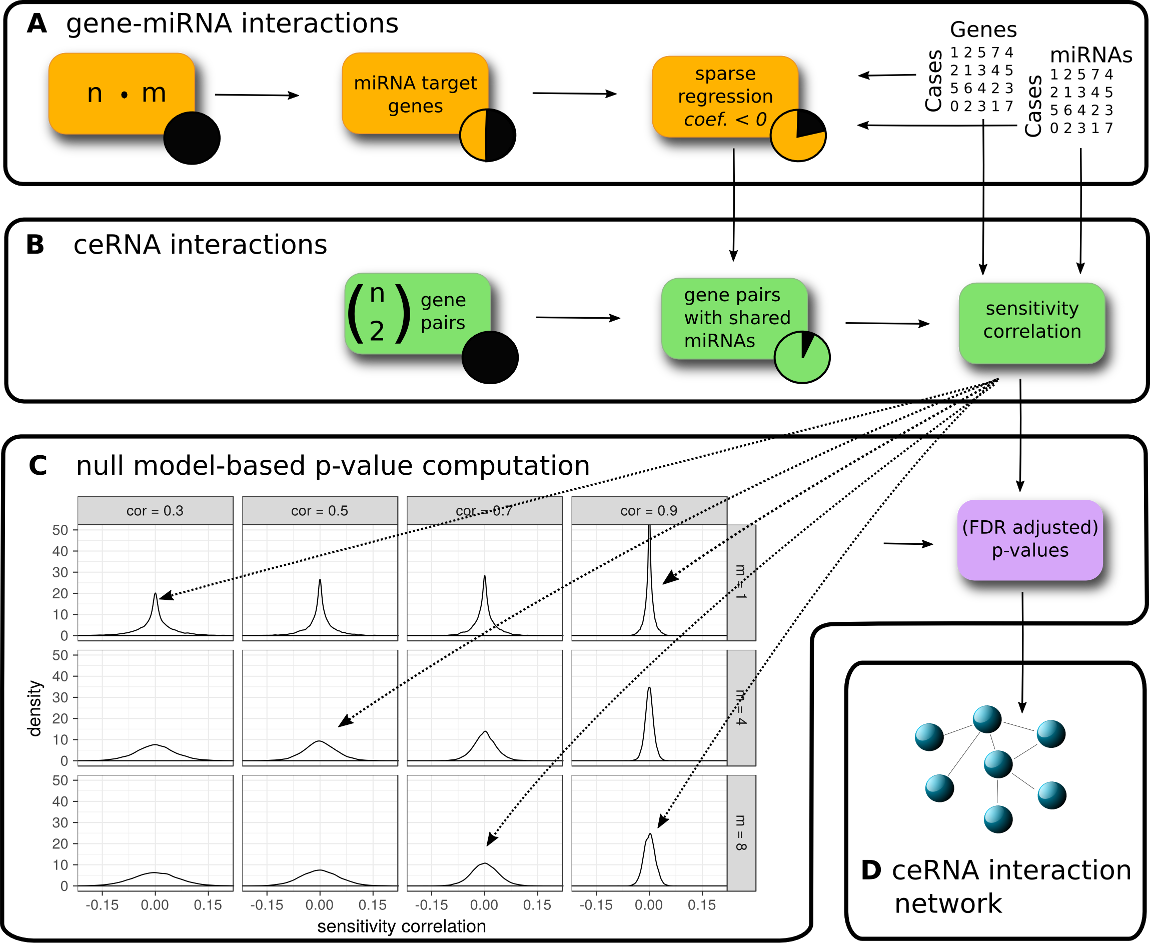 Overview of the SPONGE workflow. (A) Predicted and/or experimentally validated gene-miRNA interactions are subjected to regularized regression on gene and miRNA expression data. Interactions with negative coefficients for miRNA regulators are retained since they indicate miRNA induced inhibition of gene expression. (B) We compute sensitivity correlation coefficients for gene pairs based on shared miRNAs identified in (A). (C) Given the sample number, we compute empirical null models for various gene-gene correlation coefficients (k, columns) and number of miRNAs (m, rows). Sensitivity correlation coefficients are assigned to the best matching null model and a p-value is inferred. (D) After multiple testing correction, significant ceRNA interactions can be used to construct a genome-wide, disease or tissue-specific ceRNA interaction network. In the following hands-on tutorial, we will highlight how each of these steps can be achieved with the SPONGE R package.

We start with loading the package and its dependencies

The result is a list of genes, where each entry holds a data frame with retained miRNAs and their coefficients (or p-values in case the F-test is used). Note that the mir_predicted_targets parameter may also be NULL. In this case, no prior knowledge is used and all putative miRNA-gene interactions are used in elasticnet regression.

In the second step of the SPONGE workflow, we identify ceRNA actions candidates. SPONGE uses the information from (A) and checks for each pair of genes if they share one or more miRNAs with regulatory effect. This reduces the putative number of ceRNA interactions $n\choose 2$ to consider dramatically. Next, SPONGE uses the ppcor R package to compute multiple miRNA sensitivity correlation (\emph{mscor}) values. Note that this is a generalization of sensitivity correlation as defined by Paci et al.. These values capture the joint contribution of several miRNAs on the ceRNA regulation of two genes while accounting for their cross-correlation:

We apply step B of the SPONGE workflow as follows:

We can plot the result of these simulations to see how the distribution is affected by gene-gene correlation and number of miRNAs (if ggplot2 is installed):

The above method adds two additional columns to the ceRNA results, namely $p.val$ and $p.adj$.

The last step is fairly straight-forward. We decide on an FDR cutoff for selecting significant ceRNA interactions, e.g. FDR < 0.01 and extract those from the result.

The significant ceRNA interactions from above can be used to construct a ceRNA network in which genes (ceRNAs) are nodes and edges are drawn when a significant ceRNA interaction is predicted. SPONGE constructs such a network using the igraph R package and computed different network statistics for individual genes. Eigenvector and betweenness centrality can be used to assess the importance of a gene in the ceRNA network. In this example we only selected very few genes which makes this exercise a bit futile. However, if applied to larger gene sets, betweenness centrality reveals powerful ceRNAs that may pose biomarkers of miRNA regulation.

Note that additional information about the ceRNA effect strength can be incorporated via weighted eigenvector or betweeness centrality. In this case, we add a column weight to our results table as follows:

We can also plot these results with a node degree distribution on top and centrality vs node degree below. The parameter top controls how many of the top x samples are labelled.

Even though SPONGE is quite fast in inferring ceRNA interactions it will still take a few days to process a dataset with hundred of samples on a single CPU. We thus built SPONGE on top of the foreach R package:

The foreach R package will allow you to parallelize SPONGE over multiple CPUs. The beauty of this approach is that it is up to the user to decide which backend to use for this. We refer to the foreach package for details. One of the most used backends for foreach is the doParallel R package. Once a parallel compute environment is set up, SPONGE can use it automatically (no extra parameters needed):

num.of.cores <- 2 #many more on a compute cluster

if you want to use logging

A frequently encountered caveat of foreach is that each of the parallel workers will require a copy of the data its operating on. With large datasets this becomes an issue even on compute servers with large memory. We thus support the bigmemory R package to allow each parallel worker process / thread to access data in shared memory. To make use of the big memory package simply replace the gene_expr and mir_expr parameters with bigmemory description objects. We refer to the documentation of the bigmemory package for details. If you have access to a compute server with 40-60 cores, you can typically compute a genome-wide ceRNA network within a few hours.

SPONGE allows for sampling covariance matrices given a gene-gene correlation and a specific number of miRNAs. The package contains a number of precomputed matrices for various parameter combinations. However, it is also possibel to compute additional matrices:

SPONGE was primarily designed to infer ceRNA interactions efficiently. We point out, however, that the principle behind SPONGE for infering partial associations is applicable to other types of regulation in molecular biology. SPONGE is not limited to negative regulation as it is the case with miRNA regulation and can thus also be useful to study, for instance, RNA binding protein regulation or transcription factor regulation. Moreover, we could envision that this approach is also applicable outside of bioinformatics where partial association is of interest. To our knowledge, SPONGE presents the first method to sample random covariance matrices under the null hypothesis that partial correlation and correlation are equal, which may be useful as a starting point to gain a deeper understanding of the theoretical properties of partial correlations in the future.

Try the SPONGE package in your browser